A FATHER-of-six died after he suffered a fatal allergic reaction to a bee sting. 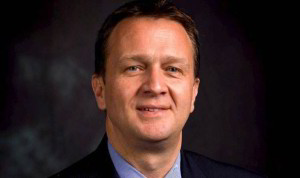 Luke Calcraft knew he was allergic to insect bites and always carried an EpiPen.

Although it is thought he was able to administer the adrenaline shot after he was stung on July 28, the 46-year-old died four days later in hospital.

Today friends paid tribute to Mr Calcraft, who grew up in Wales before moving to Chelmsford, Essex.

He was an active member of the Church of Jesus Christ of Latter-day Saints and leaves behind his wife, Natasha, and children Tom, Sam, Joel, Sarah, Rhonin and Arija.

Former colleague Peter Holmes, 62, from Shoebury, Essex said: ""hat has happened is a terrible tragedy. Everybody is shocked.

"I am still in touch with people I worked with and we all can't believe what has happened. It's hit us all hard."

He added: "Luke was an altruistic character. He worked hard trying to persuade various authorities to do certain things for the benefit of residents' safety.

"A lot of his spare time was spent working on road safety.

"It was something he was very passionate about and gave a lot of his time to it. He was a very popular man and people felt good about having him around.

"I will remember him for being very good at his job. He was a decision maker, but also very diplomatic.

"He loved the company and gave so much to the business and to Southend." 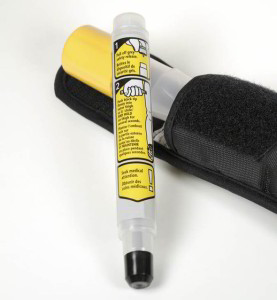 In 2012 the family moved from Essex to Pennsylvania, USA, where Mr Calcraft was president of the medical systems group Olympus Corp.

A spokesperson for Olympus in America said: "We are deeply saddened by the sudden and unexpected loss of our friend and colleague, Luke Calcraft, president of the Medical Systems Group at Olympus Corporation of the Americas.

"Our thoughts and prayers are with Luke's family and friends."

Many of his colleagues spoke fondly of the married father, who was also an active member of the Church of Jesus Christ of Latter-day Saints.

"The bees stung several students anywhere from one to 12 times 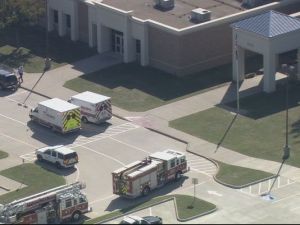 SAGINAW, Texas — More than 20 middle-school students were injured Tuesday when they were stung by bees during an outdoor physical education class.

MedStar EMS said the children ages 10 to 12 and were stung outside Highland Middle School, near Fort Worth, while playing soccer.

Paramedics said four sixth-graders were transported to Cook's Children's Medical Center in Fort Worth. One boy was in "semi-critical" condition because of difficulty breathing.

EMS spokesman Matt Zavadsky said the other three students had minor reactions but were taken to the hospital to be checked. The other children were treated at the scene.

As the students were tended to, the school district's exterminator sucked the bees out of an irrigation valve box.

"There was a lot of screaming," said Isaac Armendariz, a Highland student, who was among the 22 children stung. "The coaches were just trying to get everyone. All the kids were screaming trying to get the bees off their backs."

Isaac got stung by beees in the neck and leg.

"We had several students who were stung anywhere from one to 12 times," said Heath Stone, a supervisor with MedStar ambulance service. He said the bees were found to be aggressive, and are being sent for testing to see if they are Africanized bees.

It's just scary to see that … just really crazy," Isaac said. "We all were being treated, but it just took a long, long time to get all of us." 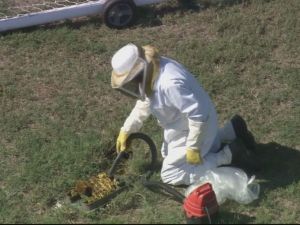 Although school continued, many parents came to get their children early, like Isaac's dad, Rob Choate.

"I'm going to monitor him … get some Benadryl in him … and hopefully he'll be going to school tomorrow," Choate said.

A spokesperson for the Eagle Mountain-Saginaw Independent School District said the bees have been euthanized. And while they think they got them all, they'll be monitoring the track area closely before opening it again for student use.